DemocracyNet is a non-partisan and non-profit association of and for researchers in democracy studies, who approach democracy from various disciplines and perspectives.

Launched in 2011 as an informal network, DemocracyNet has developed into an association in 2016. Rebecca Welge initiated the network and co-organized its first events, including a year-long events series together with Karima Bousbah and Antoinette Scherz. Its re-organization into an association was pushed forward by Alice el-Wakil, Lea Heyne and Lukas Peter.

DemocracyNet was created in order to contribute to addressing three points that are often critically mentioned in the context of academic research:

The association DemocracyNet aims at offering a light structure to facilitate collaborations among researchers in democracy studies. It provides opportunities and structural support for members’ projects  that correspond to at least one of its two guiding aims:

Role of the association

DemocracyNet does not provide funding, but a formal structure that facilitates the organization of various kinds of projects and collaborations. The organization of events and the functioning of the association takes place on a voluntary basis.

It offers a network of democracy studies researchers ready to share their experience and organizes workshops to foster new collaborations. It can help mediatise and announce events organized by one or several of its members through its website, Facebook page, Twitter page, and public mailling list.

Members of DemocracyNet are researchers from all places 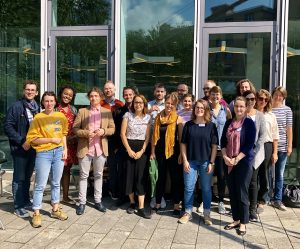 and all levels who are dedicated to the study of democracy. We also welcome practitioners who would like to join our association. More details about membership: here

Members can propose to take charge of one of the continous tasks needed to keep the association running. They decide to launch their own projects or to join another member’s project and are responsible for finding collaborators and obtaining funding. But they can also remain passive.

Don’t hesitate to contact us if you have questions regarding membership.

Since 2011, our members have organized a number of workshops, events series, and other collaborations. All of these projects have focused on various aspects of democracy, for instance:

In 2012-13, an events series has focused on “Citizenship in Europe,” using as guiding questions “How it should be and how it actually is” – in other words, how political actors conceptualize the link between state and citizens, and how citizens themselves actually experience their citizenship.

In 2015-16, another events series titled “Democracy: Bridging Facts and Norms” has proposed to explore more in-depth the relation between democratic ideals and democratic practices, as well as the relation between various academic approaches that study democracy. It has resulted in four public lectures and debates, two academic workshops for junior researchers with international experts, and the launching of a podcast channel.

Members have also collaborated to organize panels in conferences, internal workshops to exhange on work-in-progress, or to co-write papers.

For more details about these projects, see Workshops and Activities.

You can also stay informed about our latest activities and projects through our Facebook page and by following us on Twitter or Mastodon.