How do you distract young and older people equally from their Friday evening stroll by the lake in order to engage in reflections about democracy and test their political knowledge? How do you do this without annoying these strollers but ensure they keep a good memory? Well, there is only one possible solution: you let them take part in a Democracy Treasure Hunt, let them build a Democracy Tower and play Henri-Pierre’s notorious Democracy Jenga. 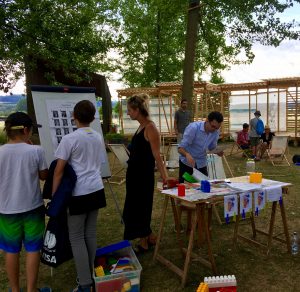 This is exactly what happened on July 21, 2017, at the shores of the lake in Yverdon-les-Bains, thanks to a group of DemocracyNet.eu members. DemocracyNet.eu had been invited by the NGO ICI to create events for the politics week (semaine politique) as part of the participative festival La Derivée. As the key concept of La Derivée is to motivate passers-by from Yverdon and the surroundings to step out of their comfort zones and engage in new activities (such as urban gardening, architecture, or essential oils), we sought to do something similar. Our aim was to challenge people’s knowledge about Swiss politics and democracy in general while not make them feel like their holidays were interrupted by an impromptu ‘Political Education’ lesson.

With the above mentioned activities we have achieved this aim. Despite the daunting rain and thunderstorm, a number of people came by to tell us from when the current Swiss constitution dates, to identify Swiss and international political figures in the trombinoscope, and to draw us their ideal politician. According to the questions answered correctly we would allocate a certain number of Lego blocks from which the participants could build their ideal democracy.

Random selection and other innovations 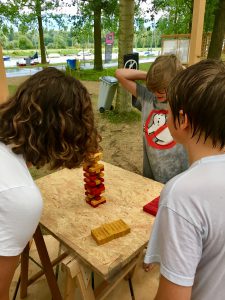 For those who still had energy and did not get stuck in a discussion with one of us about the quality of Swiss democracy or with Charly Pache from Genomi about the reasoning behind the initiative to draw politicians by the lot, there was the possibility to play Democracy Jenga against us. With red bricks representing ‘good’ democratic values and elements, the yellow blocks represented ‘negative’ elements that the participants would try to eliminate from the Jenga tower.

Overall, we were blessed with very curious participants (young and old) who took the activities as a starting point for further reflection and who did not shy away from challenging the reasoning behind the suggested correct answers or from questioning what we would share from our research. Thus, the participants left with new answers and questions. Even more wonderful: some of them came back the next day to discuss the future of Yverdon.

We thank all the groups and families who joined us for this event, as well as the entire team of ICI-La Dérivée for their help and support in organizing this day!

We are also very grateful to our sponsors for this event: 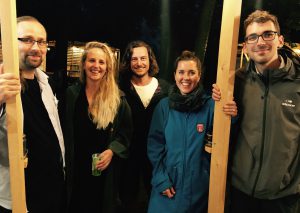