DemocracyNet.eu was invited by the NGO ICI to 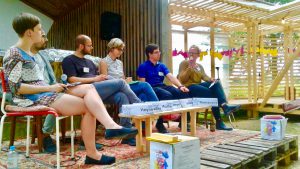 create events for the politics week (semaine politique) as part of the participative festival La Derivée. As the key concept of La Derivée is to motivate passers-by from Yverdon and the surroundings to step out of their comfort zones and engage in new activities, a group of DemocracyNet.eu members organized on July 21, 2017, a sort of democratic, discursive experiment with the involvement of local politicians and activists as well as experts from research and city planning, and, most importantly, the public.

The inspiration for this event came from the desire of our hosts, ICI, to act with regards to what they and other people from Yverdon (dis)like about Yverdon-les-Bains and make their city more liveable. We took this specific desire as a starting point for our experiment: How can we make a larger public think and discuss, in a constructive, informed, inclusive and respectful way, about what their city is, and what it could be? 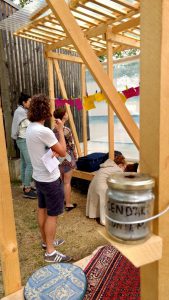 Our sort of deliberative experience took place in several steps. In order to enable the discussion to reflect the concerns of the public, we based our selection of topics for discussion on the inputs of the visitors of La Dérivée who put their ballots into two boxes beginning Thursday, July 20: One of the boxes was labelled with “What I like in Yverdon” and one “What I don’t like in Yverdon”. We gathered about 60 responses during the three days, despite the bad weather.

Inputs from the public

Before the panel discussion on Saturday, July 22, we opened the ballot boxes and put them up on a laundry line once sorted by topics. After their arrival at 5pm, the panel guests and the moderator read, reflected upon, and discussed about the topics that were brought up by the public. This preparation for the panel already led to very interesting first exchanges showing that some of our guests were surprised by the input and other weren’t at all.

These are some of the issues that were brought up: 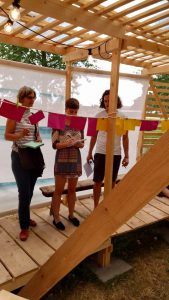 What I don’t like in Yverdon
Its lack of opportunities and activities – Its transport system and bike paths i.e. the lack of encouragement of alternative means of transportation – Its insecurity especially around the train station – Its (too) quietness – Its refugees – Its lack of a consistent political strategy for the city – Its drugs dealing scene

At 6pm, the public discussion began in front of a dense public, mainly young people from Yverdon-les-bains. 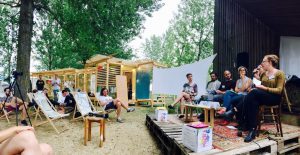 Each panelist first gave a short statement on their impression of the ballot papers, and offered different points of view – from political to theoretical and artistic considerations. The panellists who live in Yverdon largely agreed with the topics and problems brought up by the ballots. The discussion then took place in two consecutive steps: 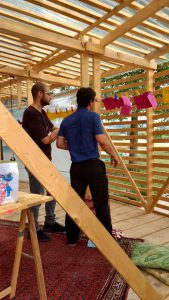 The main outcome of this discussion? Yverdon does much better than its reputation, and its citizens should be happy and proud of their city, and keep working on improving it as they already do. For successfully doing so, our panellists and audience agreed that it is crucial to forge local alliances and to reach out especially to those who might be critical of one’s plans. Once these groups are on board, a project like La Dérivée is much more likely to stay and prosper over the long term.

And the main outcome of this deliberative experiment? The panel brought together many different voices, and allowed for an in-depth exchange in an informal and pleasant setting. It is especially the combination of the bottom-up input provided through the ballot boxes with the moderated panel that has fostered this collective reflection on the city’s future. The unique and more informal setting of this discussion was particularly conducive for the audience to speak their mind freely, to ask questions and engage in a discussion with the panellists and – more importantly – among themselves. 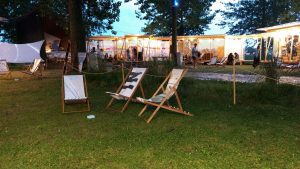 We are very grateful to our panelists and our moderator, who all accepted to take part in this unusual experiment!

And thank you to the entire team of ICI-La Dérivée for their help and support in organizing this event!