Members of DemocracyNet.eu organized an “Apéro Votations” on September 3, 2017, in the frame of the participatory festival La Dérivée. This third event of DemocracyNet.eu at La Dérivée aimed at providing an innovative space for the public to get informed and actively discuss about two issues put to the popular vote of September 24, 2017. “Experts” provided the information; the “Apéro” format provided the relaxed and friendly atmosphere.

Origin of the project

The concept of this event emerged from discussions between the two project leaders, Alice el-Wakil and Vasco Gamboni. The original idea, which was to organize a dinner to discuss one or more popular vote issues in a friendly and open-minded atmosphere, developed into the proposal to host a larger-scale Apéro after Ici-La Dérivée contacted DemocracyNet.eu. As such an event has to our knowledge never been organized before in Switzerland, the support and encouragement of La Dérivée convinced us to take this opportunity to make a first experiment of “Apéro Votations” on the topics of the popular vote of September 24, 2017.
The aspects most important to us were the following:

The two national level issues put to the vote on September 24, 2017, were selected for the discussion:

An audience of about 30 people joined the La Dérivée setting for the Apéro Votations at 6 p.m. The event started with a short presentation and overview of the event by the organizers, and with a distribution of snacks to the audience. It then went on in two phases:

First, we wanted “experts” of the civil society to provide “objective” and accessible inputs from to explain the policy packages put to vote. Two such “experts” kindly accepted our invitation: 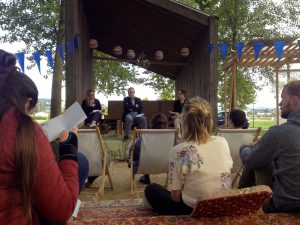 They contributed very well to realizing the objective of this “frontal” explanation moment, which was to provide the audience with information about these policy packages, their origin, the reasons why they were put to the popular vote, their content, their implications, and the main arguments for and against them. Since, due to time constraints, we could only invite one “expert” on each topic, we invited the moderator of the event to play both the role of moderator and contradictor.

His task was a complex one, as he had to both moderate the discussion and be able to present other positions or counter-arguments. He managed to put the “expert” inputs into context and to examine and answer them critically in order to try weeding out errors and bias. 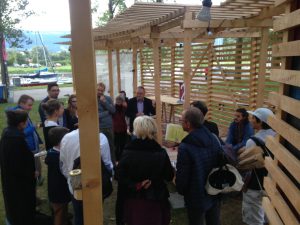 Second, we wanted to invite members of the audience to actively ask their questions and discuss about the two issues presented. The entire audience had the possibility to move to smaller groups (following reandomly distributed numbers they had received in the first phase of the event) where moderators would facilitate the discussion.

To close the event before the start of the next event at La Dérivée, we gathered in a small, standing group to reflect on the small group discussions and thank everyone for their participation. Feedback from the participants was very positive. 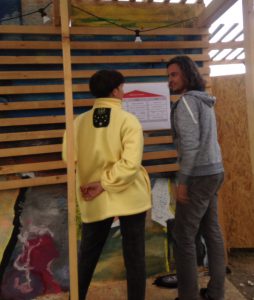 We are very grateful to La Dérivée for providing us this great opportunity to experiment a new format of political discussion in their wonderful setting!

All guests and moderators mentioned above generously accepted to participate to this event on a voluntary basis. Thanks to the support of La Dérivée and of the Municipality of Yverdon-les-Bains, we could reimburse their travel expenses.

In addition, the organizers had the chance to benefit from the help and support of other organizations

Finally, thank you to all members of the audience who joined us for this Apéro Votations, and encouraged us to organize similar events in the future thanks to their engagement and interest!

See an interview on the entire La Dérivée events series by DemocracyNet.eu with Swissinfo.ch
And here are the reports of our first and second events in La Dérivée